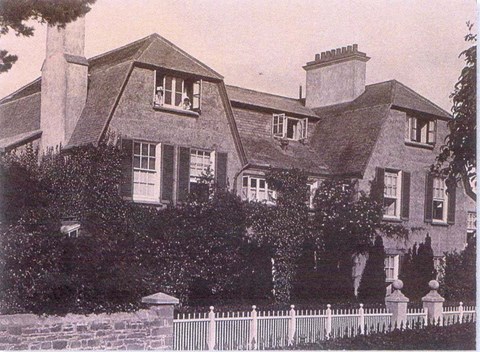 The membership comprises generally of local businessmen with an age profile of 30 years+. As a private members club, membership is generally limited to individuals introduced by established members. A strict dress code is expected of members and their guest’s, smart casual is the order of the day lounge or dress shirts with a tie in the winter open necked or polo shirts in the summer.  No jeans or trainers after 6:00 p.m.

The building (pictured left circa. 1912), in which the Club is currently located, has an historical past having been built and lived in by a world renowed nautical artist Charles Napier Hemy. Orignally called "Churchfield", later renamed "Penvale", it is a large extensive property built in the 1880’s and designed by a Belgian architect.

Although originally founded at the Subscription rooms in Church Street, the earliest home of the Athenaeum Club was at the premises of 18 Market Street, above what is now W H Smiths. The Club was relaunced in 1912 (100 Years in 2012).

From 20th February 1920 until 31st July 1945 Churchfield was under the continual ownership of C P Foster, it was during this that the name change from "Churchfield" to "Penvale" took place. On 31st of July 1945 ownership was transferred to Harold Arthur Rider and Walter Otho Pearce, 2 local businessmen as joint owners, at a price of £2,750 and on 5th November 1945 a “Deed of Release” was given to Messrs Rider and Pearce which effectively released the building to be used as a business premises. On 30th July 1947 a Conveyance transferring the ownership to the trustees of the Athenæum Club for a sum of £3,110 was signed.

The Athenæum Club's new home came into use in that year, to mark 50 years in "Penvale" a day was devoted to celebtation and a relaunch of the Club's image in 1997.